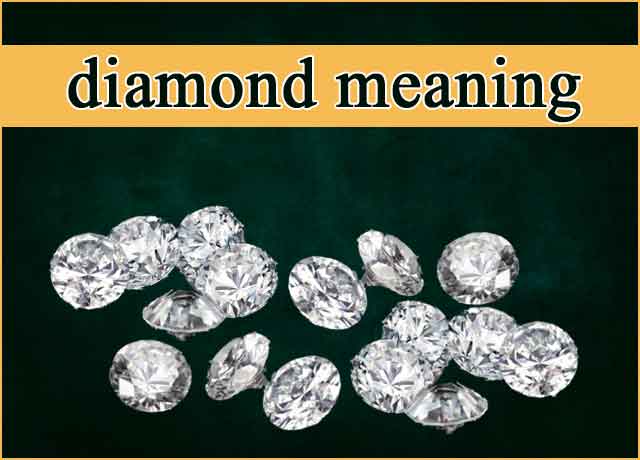 Diamonds are a solid mineral, a natural crystalline substance, the transparent form of pure carbon or almost pure carbon. Diamonds have extraordinary properties. Diamonds have a wide color range in worldwide with very low reactivity to chemicals and high refraction also include high dispersion of fire, rarity, and, extreme hardness and durability. Diamonds are known as the “king of precious stones”, they sparkle, dazzle and symbolize purity and power.


Diamond Meaning: A diamond is the oldest thing you will ever own, probably 3 billion years old, completely two-thirds the age of the earth. A diamond is a strategic, exclusive and high-tech super material for every technological society. Diamond is suitable for the birthstone in the month of April.


Diamond meaning: A diamond is ultimately composed of the single element which is carbon, and it is the arrangement of the C atoms in the lattice that give a diamond its amazing properties. Both stone diamond and graphite are composed of carbon only. However, a diamond is the hardest known material and graphite is one of the softest, this was caused by a rearrangement of the way the atoms are bound together. Diamond carbon atoms are connected in a regular three-dimensional lattice with a repeating or crystalline pattern.

diamond meaning: Diamond is part of the natural cubic or ‘isometric’ crystal system. The most common useful crystal structures or arrangements are:

Diamond Meaning: A diamond is the most ultimate gem, with some weak points and many strong points. Diamonds are known to be the most difficult substance found in nature, but few people realize that diamonds are four times harder than the next hardest natural mineral, corundum sapphires and rubies.

Natural diamonds are formed deep in the earth’s mantle layer of the element carbon, about 180 km below the surface, where high temperatures and pressures exist. Some diamonds form at depths of 300 – 400 kilometers, or even deeper, but these diamonds are very rare.

Read also about:  How are Diamonds Formed  |  Diamond in the Rough | Diamond Meaning https://www.blissshine.com/

Diamond Meaning: The earth’s mantle consists of molten rock, metals and other materials. The temperature is high at this depth – between degree 1100 ° C and 1400 ° C. The high pressure required to form diamonds is caused by the weight of 180 km of rocks pressing downwards. In addition to carbon, there are very small amounts of other substances, such as nitrogen and sulfur, that can get stuck in the crystal when it is formed in the mantle. These impurities can color the diamond. One of the most rare is pink diamonds

Because of the unique internal structure and light reflections, when cut in the right proportions, diamonds collect light in themselves and then send it back into a shower of fire and shine.

Diamond Meaning: The life of a polished diamond is considered as the amount of light that is reflected back to the viewer. The term life is also called brilliance. If the diamond is cut with good proportions, the sparkle will be increased.

Diamond Meaning: Gloss refers to the surface gloss on a polished diamond. Fire the color play that can be seen from the crown of a polished diamond. As the light enters the diamond, it is refracted and divided into the colors of the spectrum and reflected back. The resulting are colorful rainbow-like flashes of light are called fire (diamond meaning).

Diamond Meaning: The hardness of diamond is an important feature. As an industrial tool it has many applications and modern industry is highly dependent on it. As a gemstone it is resistant to scratches and wear, which ensures that a finished gemstone retains its luster and shine. Due to the hardness and the unique way in which it is manufactured, a diamond polishes very slowly. It forms look like an unusually flat, absolutely polished adamantine surface, with exclusively sharp, straight edges between facets and no others gem can match this brushing standard.

Diamond has the highest heat conductivity of any known substance because the densely packed crystal structure conducts heat very quickly. The main thermal conductivity of diamond is exactly five times higher than that of copper. This explains why a diamond feels cold at the first touch, but gets warm quickly by the heat of your fingers.

Diamond Meaning: Only about a fifth of all mined diamonds can be considered as gem quality. From 40 to 250 tons of gravel and sand must be processed today to extract one rough diamond from the world’s thinning diamond deposits. Experts mostly estimate that all known true diamond reserves will be exhausted within 30 to 40 years. 75 – 80% of all mined diamonds are used for industrial applications such as drilling, grinding or sawing. The rest is used for jewelry or investment. Less than 2% of the mined diamonds are of such a high quality that they can be considered as investment quality. (Diamond Meaning)

On average, 250 tons of ore must be mined and processed to produce a diamond of one carat of gemstone quality. When mining is complete, sorters look at rough diamonds and separate them into small piles by shape, size and quality, a long and arduous process.

Diamonds were mainly used as talismans to ward off evil and to protect the wearer in battle. Although there was some mystique about diamonds because they were so rare and hard to come by, many early cultures believed they had magical properties

diamond meaning: The word diamond comes from the Greek word “adamas” which means invincible, in reference to the eternity of love. In 1477, Archduke Maximilian of Austria gave Maria of Burgundy a diamond ring, with which he started the tradition of diamond engagement rings. The reason that a woman wears an engagement ring on her third finger of her left hand dates from the Egyptian belief that the vena amoris (vein of love) ran directly spreading from the heart to the top of that fixger. (Diamond Meaning)

Many of the rarest diamonds occur due to rare natural accidents in the colors pink, blue, green, amber or even red. These diamonds are called Fancy diamonds and are evaluated by a different set of color standards. Fancy diamonds are more varieties and the most expensive due to their extreme rarity.

Diamond Meaning: It is the only gem mineral that consists of one element, making it the purest gem of the earth. That is why it is fitting that the purest and most brilliant of all the gems in the world make the diamond engagement ring the perfect symbol of eternal love.

Thanks for reading about diamond meaning. Please share it to others for spreading information and knowledge about writing. Diamond Meaning