Tree of Life Meaning In all cultures; from the mystical east to the Christian West; they have thought deeply about the meaning of life. What is a life that fascinates us all? Maybe we should go back to the root and wonder why we were born? What purpose do we have in life? Are we the ones who set the goal or is it destined? 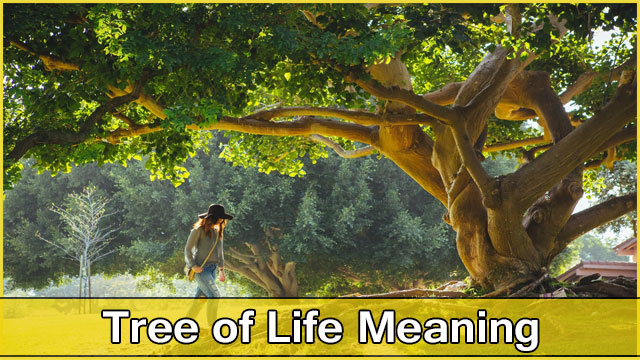 All cultures have tried time and again to explain this. Despite the different interpretations, it seems that there is one image that dominates in many cultures, namely a tree of life. For most, it is a mystical tree, seen as a symbol uniting the earth and the sky. The roots are firmly planted in the ground, which stands for stability. The branches and leaves grow towards the sky and its trunk, the being that unites both heaven and earth.

In this sense, all beings on Earth are connected because we live in the same place that is part of this tree. Every being is equal and every species will give and depend on other species; like how the grass feeds deer eaten by the tiger and eventually the tiger on the grass disintegrates and feeds it with nutrients. Every person, every culture in the world is just a branch that belongs to the same tree.

Tree of Life Meaning for Egyptians

For all Egyptians, the acacia tree is their tree of life. It is thanks to the story of Isis and Osiris emerged from an acacia tree, the pattern tree of Iusaaset, one of the early Egyptian goddesses of vague origins. In the Bahá’í faith, their view of the tree of life is more symbolic. The tree of life is the embodiment of the manifestation of God, the source of all spiritual good.

Tree of Life Meaning as Yggdrasil

The Norwegian’s tree of life was called Yggdrasil. It grows in the middle of Asgard, an evergreen ash tree that obscures worlds with its branches. The Norse gods held all meetings and courts under this tree. The god, Odin, hung himself on the branches of this tree to gain power over the runes and all their secrets. The day he gained the knowledge, he fell, screaming.

A tree seems immortal because it can live for hundreds of years; so people consider it a witness to several generations of a family. Perhaps it is the etymology of the expression “family tree”. When a tree (which could mean the current generation) falls, the seed (sons and daughters) is left behind and they will grow into a new life. A more direct interpretation would be to “branch” a family from one generation to the next; like a grandparent of the father and then the daughter and etc.

Tree of Life Meaning for Chinese

In Chinese mythology, depictions of the Tree of Life carry a phoenix and a dragon with the dragon representing immortality. The fascination with immortality in people in China is so great that a story in Taoism tells of a tree that produces a peach every three thousand years and that the person who ate the peach will live for another three thousand years. This tree is owned by Xi Wang Mu or “the Queen Mother of the West”. She is one of the oldest figures worshiped in Chinese history.

Trees are symbols of longevity and even immortality for the Chinese. Confucianism is deeply rooted in the heart of Chinese culture, and this is one of the reasons why immortality or even longevity is so important to the Chinese: the older one gets, the more revered he is; living a long life means having more wisdom and a very high position in society.

Tree of Life Meaning as Garden of Eden

On the way west, the tree of life is one of the two main trees (next to the tree of the knowledge of good and evil) planted in the Garden of Eden. Catholic Christianity believes that the tree of life represents the innocence of mankind that is free from all sin, including original sin. This is the condition Adam and Eve was in before they displeased God. It is also associated with the story of Eve taking an apple from a tree; coaxed by the serpent and bites it, sinning humanity.

Tree of Life Meaning in Bible

Proverbs 3: 13-18 of the King James Version of the Bible says that those who have obtained wisdom, which is “more precious than rubies,” have obtained the Tree of Life. In a subsequent chapter of Proverbs 15: 4, it describes a person of a moral character who resembles having the key to the tree of life.

The Tree is also known as a ‘Creator’ where the tree provides protection with its great leafy shades and it provides fruit for the nourishment and regeneration of life.

Charles Darwin, the father of evolutionary theory. He used a diagram of a tree to explain how each species relates to each other. He also called this the “Tree of Life”. Be that as it may, recent research disputes this. Instead, they call it “web of life.” A “tree” is considered too simple as a type of crossing on a frequent basis.

Tree of Life Meaning Overall, the symbolism attributed to this tree applies to people all over the world, regardless of age, gender, or culture. As we grow, we need to have beliefs that are deeply rooted, yet seek wisdom by branching out, and eventually, to connect them, we have a trunk (the mind and the body). The Tree of Life echoes with a powerful message understood by all: unity.

The Tree of Life can be found in multitudes of ancient to contemporary works of art around the world. In Southeast Asia, artists style their concept of the Tree of Life into beautifully intricate batik pieces that use a tedious and repetitive process of waxing and dyeing the fabric. There is one thing that distinguishes these Southeast Asians from images of the Tree of Life; which is a common use of a gold element since gold symbolizes longevity and wealth. It can be interpreted as longevity wealth.

Tree of Life Meaning Sometimes gold leaf is used to achieve this effect and this Javanese technique is known as batik Parada / Prada (a type of batik that uses gold to enhance the designs); is done by applying a paste and adhering the gold leaf to it. This gives the whole an elegant touch.